The New River begins high in the mountains of western North Carolina, crosses Virginia, and enters West Virginia near its southernmost tip. It then heads north to join the Gauley River, and form the Kanawha River. In so doing, it manages to transect every ridge of the Alleghenies. Its name is actually a misnomer in that it may be one of the oldest rivers in the world.

New River Gorge National River includes 53 miles of free-flowing New River, beginning at Bluestone Dam and ending at Hawks Nest Lake. The New River typifies big West Virginia style whitewater. Within the park it has two very different characters. The upper (southern) part of the river consists primarily of long pools, and relatively easy rapids up to Class III. It is a big powerful river, but very beautiful, always runnable, and providing excellent fishing and camping. There are a number of different river access points, and trips can run from several hours to several days.

The lower (northern) section of river is often referred to as "the Lower Gorge." In a state that is justifiably renowned for colossal rapids, the Lower Gorge has some of the biggest of the big with rapids ranging in difficulty from Class III to Class V. The rapids are imposing and forceful, many of them obstructed by large boulders which necessitate maneuvering in very powerful currents, crosscurrents, and hydraulics. Some rapids contain hazardous undercut rocks. 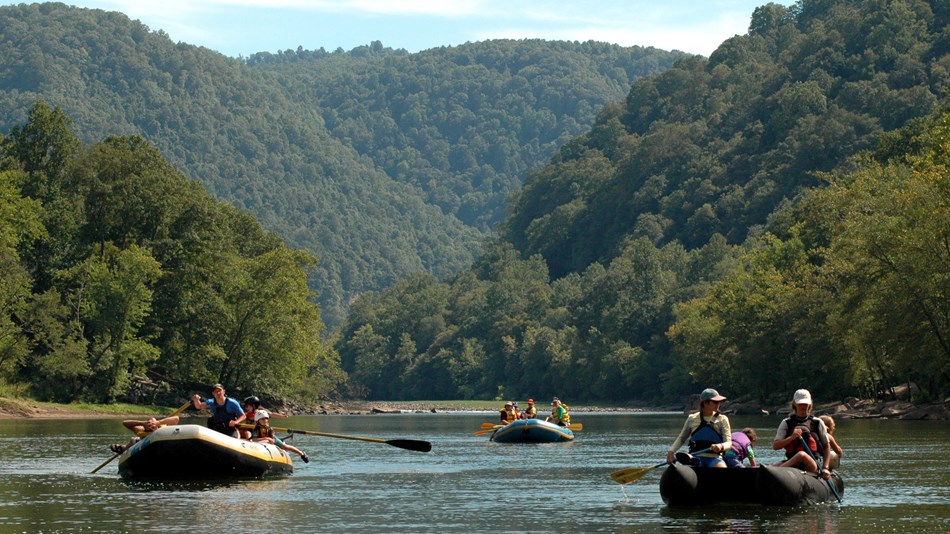